So it’s been a while since I’ve blogged. I’ve been updating my Instagram almost daily but writing out every detail is a lot lately but I missed writing.
So let’s update you on my utterly infertile journey, shall we?

On November 20th we went and I had my first intrauterine insemination aka IUI. Everything went great and our doctor said my husband’s sperm looked great and so were his numbers. I had mild cramping after the IUI but took it easy and went to the movies later that night with friends. I also kept it low key Saturday night with some designer bad bingo. Didn’t win a thing but was still smiling because I had this huge secret I did and only my bestie knew!

On thanksgiving it was so hard not to tell my mom or sisters that we did our first IUI. At one point my mom turned to me and said you seem different and then she smiled. It made me so nervous like she knew that I was pregnant. My mom knows everything. I mean, I already thought I was because I started having symptoms. This might be tmi but I mean I share everything else, so why the hell not! My boobs were hurting so bad 3 days after the IUI. Around 6-7 days past the IUI I was nauseous, a little dizzy, boobs were swollen, trouble sleeping or getting comfortable, and that turkey my mother spent all day on made me want to vomit something fierce! At one point when she walked away, I put a napkin over it!
On Black Friday I had my blood work drawn for my progesterone level. The nurse called later and said it was a 17 and no need for progesterone suppositories. I had mild cramping and tightness in my lower abdomen between day 9-12. The night of day 13 I was up all night with the worst cramps of my life. I knew I was pregnant and I knew the harsh cramps weren’t normal. I knew the morning of day 14 I was miscarrying. I couldn’t say the words and tried not to think about it.
I went in to the fertility clinic at 7 am and the nurse asked if I had tested yet. I said no because I didn’t. I didn’t want to jinx it and some how something bad happen. It’s all I could think of. I never watched so much Netflix or pinned things on Pinterest to keep my mind off peeing on those damn pregnancy tests. I worked a half a day that day and returned my boots at the mall after work. I then drove to the gas station where I slid in the lot frantically because the nurse called and I could just tell in her voice that it wasn’t good news. I gasped “I’m not pregnant, am I”? The poor nurse replied “well yes you are but it’s a chemical pregnancy, you’re having an early miscarriage”. My heart dropped. I thanked her and pumped my gas while sobbing and trying not to cause any attention to myself. I knew I had to call my husband who was in London!!! He could tell by voice how upset I was. I was so sad to tell him and kept saying I’m sorry. It was so traumatic. I told him I needed my mom and was driving over. Some how I managed to get there and collapsed on her couch. She saw me and knew something was wrong. My sister came running out of the kitchen. I was so upset. I was even more upset to see my moms face. The face of a mother who was so upset because her daughter was so upset and there was nothing to do. Nothing to do but hold me. And she did. She did because she is the mother I strive so hard to become. She is amazing. I want to be half of the mother she is. After I calmed down some, I went home. I peed on a stupid test and the most beautiful two pink lines appeared. I’ve never had that happen. 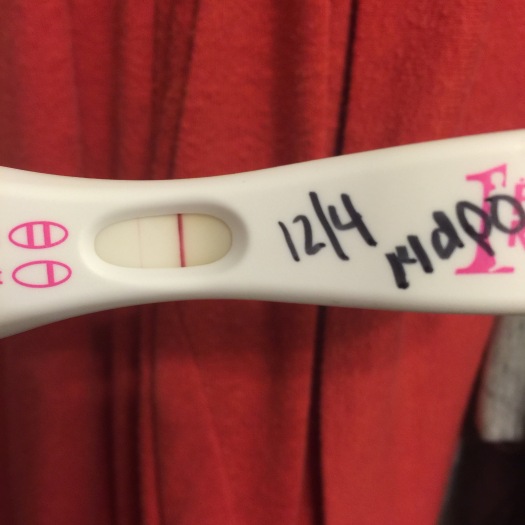 Luckily my husband was due to come home the next day. It was comforting falling asleep crying while he was there holding me.
You know what some of the worst things about miscarriage are? They are so different and no one can prepare you for them. I didn’t start bleeding for days! I just had the worst cramps ever and all of these pregnancy symptoms. Totally messes with your brain. The symptoms didn’t go away for days. It was like a tiny sad reminder that life was once forming inside of you. That for once your body was responding and doing something right. Then just like that, it’s all taken away.
It took me over a week to talk about it and not sob uncontrollably. I told my boss because I knew she knew I wasn’t myself and I’m very open about my struggles with my coworkers. We are a close family. The outreach and support from the ttc community on Instagram is outstanding. I’ve never felt so connected and supported until now. This community is something extraordinary.
After talking to my doctor, he is okay with our plan of doing IUI’s. He said we may need to strongly consider IVF/ICSI come spring. We understand but are hopeful that one little beautiful baby sticks! All you need is one!
Right now I’m gearing up for IUI number two! Already done my 5 days of clomid and will be checking my follicles on Sunday. Hopefully the IUI will wait until after Christmas, but if not we are ready!